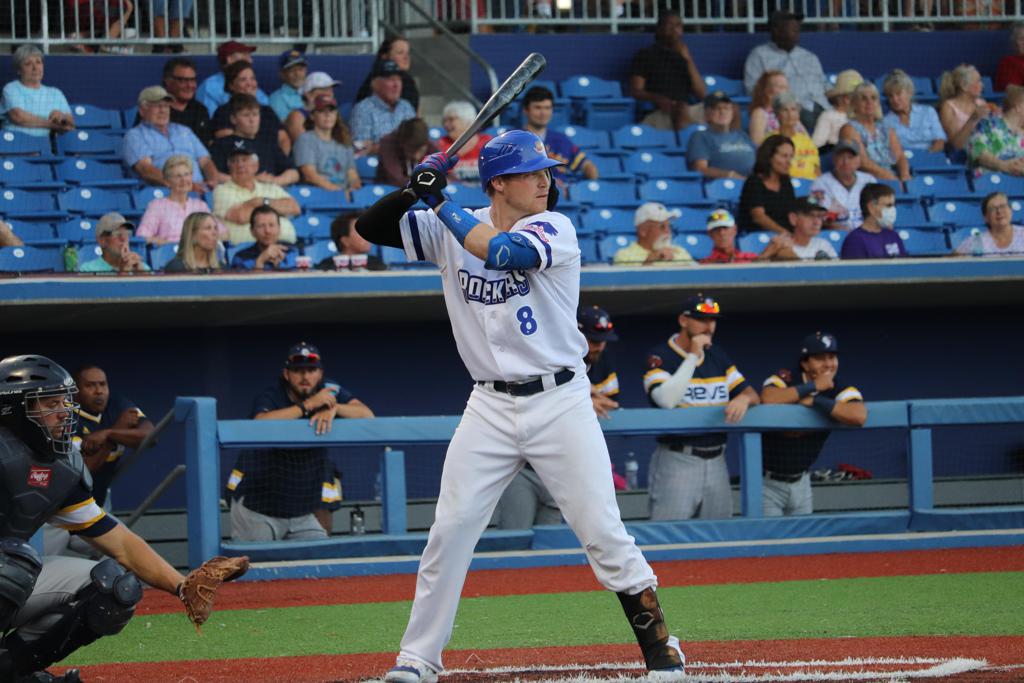 Gastonia, N.C.- The High Point Rockers offense exploded for 13 runs and the bullpen held off a late Gastonia rally to win 13-7 Friday night. The Rockers win, combined with the West Virginia Power's 7-0 defeat to Lexington elevates the Rockers to a first-place tie with the Power in the South Division with only 20 games remaining.

Michael Russell came up to bat in the first inning, marking his return to CaroMont Health Park, where his jaw was broken in late July on a stolen base attempt. He was promptly hit by a pitch from Gastonia starter A.J. Merkel (6-3). Russell promptly stole second and third base before coming in to score on a sacrifice fly from Jerry Downs.

The Rockers would add to their lead in the 2nd inning when Merkel walked Stephen Cardullo and surrendered a single to James McOwen. With one out and two on, Stuart Levy lofted a fly ball over the short left-field fence for a three-run home run and the Rockers extended their lead to 4-0. The Honey Hunters would get on the board in the bottom of the inning with a solo home run from Reese Hampton off new Rockers pitcher Tyler Garkow.

High Point plated two more runs in the third when Downs and Quincy Latimore both singled. Following a wild pitch, Michael Martinez drove them both home with a single to extend the Rockers’ lead to 6-1. Gastonia would battle back in the bottom of the 4th when the struggling Alexi Amarista launched a solo home run deep to right field to cut the High Point advantage to 6-2.

That was all that Garkow (1-0) would allow. He would conclude his Atlantic League debut with five innings of two-run ball, allowing five hits, walking none and striking out six.

The Rockers would balloon their lead to 13-2 by the midway point of the eighth inning, thanks to home runs from Martinez (3), Latimore (3), and Downs (18), as well as a pair of sacrifice flies from Michael Russell.

In the bottom of the eighth inning, Ryan Chaffee entered the ballgame for the Rockers and the Honey Hunters offense finally stirred. After an RBI single from Jason Rogers and an RBI double from Joshua Sale, Manuel Geraldo launched a pinch-hit, 3-run home run to get the Honey Hunters to within six but they would get no further. Neil Uskali finished the 9th inning for High Point, sealing the 13-7 win.

The Rockers and Honey Hunters resume their weekend series Saturday night at 6:50 at CaroMont Health Park. Newly minted ALPB August Pitcher of the Month Tommy Lawrence will start for High Point, while Sam Burton gets the ball for Gastonia.