High Point, N.C. - The Atlantic League of Professional Baseball announced its schedule for the 2020 season on Monday. The High Point Rockers will open their second year at home at BB&T Point against the Southern Maryland Blue Crabs on Thursday, April 30th, 2020.

“After a tremendously exciting and competitive 2019 season, I think all of our clubs and fans can expect more of the same in 2020,” said Atlantic League President Rick White. “We are happy to announce this season’s slate of games and are already looking forward to Opening Day.”

The 2020 season will feature a 126-game schedule that begins on Thursday, April 30th, and ends on Sunday, September 20th. Eight member clubs will make up the Atlantic League, including the Road Warriors, who will enjoy the distinction of playing each of their games on the road. The league has utilized the Road Warriors in a number of seasons past, most recently in 2018, and the ALPB expects to return to a full complement of eight home communities in 2021.

During the 2020 season, the Road Warriors will be members of the Liberty Division in the place previously occupied by the New Britain Bees, who will now be operating in the Futures Collegiate Baseball League. The Liberty Division will continue to include the High Point Rockers, Long Island Ducks and Somerset Patriots. The Freedom Division’s four clubs remain the same: the Lancaster Barnstormers, Southern Maryland Blue Crabs, Sugar Land Skeeters and York Revolution.

Unlike their inaugural season, the High Point Rockers will be opening their second year at home at BB&T Point against the Southern Maryland Blue Crabs on Thursday, April 30th, 2020. The Rockers will open their season with a seven-game home stand. The first series is a four-game duel between the Rockers and Blue Crabs. Following that series, the Rockers will welcome the York Revolution for a three-game series (May 5th-7th.)

“Our inaugural season was more than we could have ever hoped for and we are so excited to keep rocking in High Point. Even more so, we are ecstatic that our fans will be the first ones to see us play in 2020,” said Christian Heimall, High Point Rockers Assistant General Manager. “With only 185 days left until first pitch, our coaching staff is already hard at work putting together another championship caliber team while our staff is ready to give our Rock Star fans an even better gameday experience.”

After the conclusion of the first home stand, the Rockers will hit the road for a three-game road stint against the Blue Crabs (May 8th-10th) before returning home for a six-game home stand against the Lancaster Barnstormers and Sugar Land Skeeters (May 12th-17th).

The Rockers will then hit the road to New Jersey to play the Somerset Patriots May 19th-21st, with a doubleheader on May 20th. When the Rockers return home, they will welcome the Road Warriors to BB&T Point for the first time, as well as the York Revolution (May 22nd-28th).

Following their contests against the Revolution, the Rockers will fly to Sugar Land, Texas to take on the Skeeters in a seven-game series (May 29th-June 4th). The Somerset Patriots and Road Warriors will then head to BB&T Point for a six-game home stand before the York Revolution will host the Rockers for a three-game series June 12th-14th.

Father’s Day week, June 16th-21st, will see the Rockers welcome defending Atlantic League Champion Long Island Ducks and Blue Crabs. The Ducks will then host the Rockers for the first time since the 2019 Atlantic League Playoffs June 23rd-25th in New York. The Road Warriors and Barnstormers will head to BB&T Point for a six-game home stand (June 26th-July 2nd).

The Rockers will spend July 4th weekend in Long Island, taking on the Ducks in a three-game series before heading to Lancaster, Pa. to face the Barnstormers (July 3rd-9th). High Point will close out the first-half of the season against the Blue Crabs (July 10th-12th).

The 2020 Atlantic League All-Star Game will be held on Tuesday, July 14th at Regency Furniture Stadium, home of the Southern Maryland Blue Crabs. Following the conclusion of the All-Star Game, the Rockers All-Stars will meet their teammates in New Jersey to take on the Patriots (July 17th-19th). The Skeeters and Road Warriors will challenge the Rockers at home on July 21st-26th. High Point will then travel to York, Pa. and Sugar Land, TX to take on the Revolution and Skeeters (July 28th-August 2nd).

High Point will then head to Long Island for a four-game set August 18th-20th, with a doubleheader on the 19th. Following their trip to Long Island, the Rockers will head to York, PA to challenge the Revolution August 21st-23rd.

More exciting news about the 2020 season, including game times, ticket on-sale dates, and the 2020 promotional schedule, will be announced at a later date. In the meantime, you can help the Rockers prepare for next season by filling out the 2019 Postseason Fan Survey online. The first 1,000 fans to do so will receive two FREE 2020 ticket vouchers. Fans secure their seat for a rockin’ good time in 2020 with Rockers Season Tickets. Simply call 336-888-1000 or slide to HighPointRockers.com to make your $50 deposit. You don’t want to miss an incredible second season! 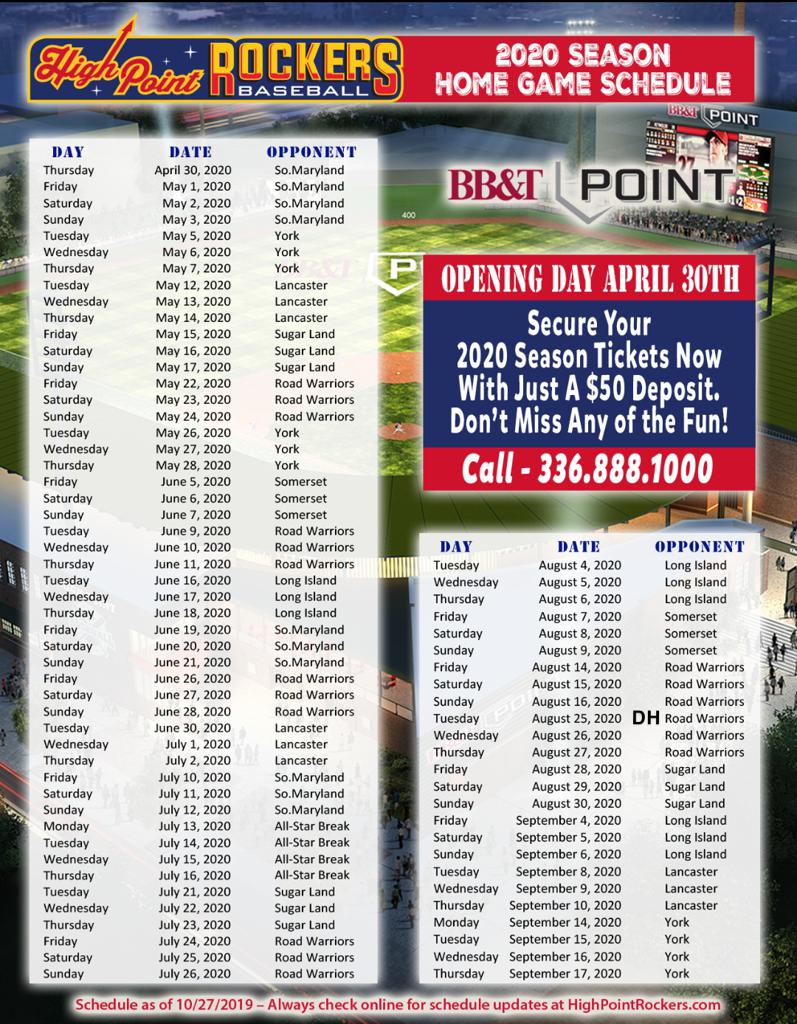