High Point looks ahead to series against Lancaster 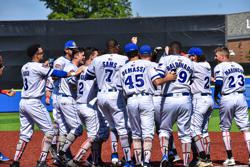 High Point, NC –  After ten innings of play with the series on the line, the High Point Rockers defeated the Long Island Ducks 3-2 on Father’s Day, tying the series. This series-ending win followed a 5-3 loss Friday evening, and a 3-2 loss and 8-0 shutout in yesterday's double-header.

Seth Simmons started on the mound, allowing two runs on seven hits and striking out four over 6.2 innings. Chase Huchingson relieved Simmons in the seventh, and Brian Clark came in to replace Huchingson in the eighth, striking out one. Trevor Frank looked to record (recorded?) another save for the Rockers, allowing just one hit in the ninth inning.

The winning pitcher today was Trevor Frank (2-2), while Enrique Burgos (4-2) picked up the loss.

Join us at BB&T Point for Taco Tuesday as the Rockers take on the Lancaster Barnstormers. Fans can head over to highpointrockers.com or call (336) 888-1000 to learn about our themed games, promotions, and more!