HIGH POINT, N.C. – The High Point Rockers added more “big league” talent to their roster over the weekend, drafting Antonio Nunez and former Major League pitcher Akeel Morris as part of the Atlantic League Showcase in Lakeland, Fla. The new additions were acquired following three days of training and drills at Joker Merchant Stadium, attended by almost 300 players, at a showcase put on by both the Atlantic League and Prospect Dugout.

“We as an organization, as a coaching staff, we are just ecstatic to add these two players,” said Rockers manager Jamie Keefe at a press conference in Florida. “The amount of talent that is out here can fill a bunch of rosters in the benefit. This is new for the Atlantic League and we are reaping the benefits.”

Akeel Morris, a right-handed pitcher from the U.S. Virgin Islands, has spent parts of three seasons in Major League Baseball, including last year with the Los Angeles Angels. He also has seen time in “the bigs” with the Atlanta Braves (2017) and New York Mets (2015). Originally a 10th round draft pick of the Mets in 2010, Morris has worked with Rockers pitching coach Frank Viola before, who is excited to have the opportunity to teach him again.

“He has fun playing the game, he’s always smiling,” said Viola of his new arm. “He’s had some ups and downs in his career, but he works his butt off and that’s what you look for in these guys.”

Morris will start training camp as a starter but has the experience of coming out of the bullpen as well. A pitcher with a low- to mid-90’s fastball, plus-changeup, and a slider, his versatility will be a strong asset for the Rockers. Akeel is one of 14 players in the history of MLB to be born in the Virgin Islands, and one of five from St. Thomas. As a triplet, his competitive nature has been ingrained since birth, making him that much more valuable to the team. 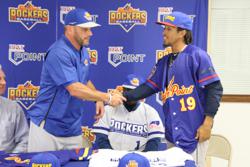 Originally drafted as a shortstop, Antonio Nunez will join High Point as a pitcher after a different route to the mound. While competing in the Houston Astros organization, Nunez suffered a broken rib in a game. On his first day back on the active roster, he was thrown in to the fire during a lopsided game and impressed his coaches with his strong arm.

Prior to his new career in baseball, Nunez was an 18th round pick by the Astros in 2014 and quickly rose up the ranks in the system. The 26-year-old Brooklyn, N.Y. native is still learning the art of pitching, but his raw talent is something that has impressed the Rockers coaching staff.

“Independent baseball is in my blood,” Keefe stated. “This is why we are here. It gives me goosebumps to think that one of these two guys could be on TV by the end of the year.”

Morris and Nunez join a High Point team set to enter its inaugural year in the Atlantic League in just a few short weeks. The team will travel to Lancaster, Pa. for their first-ever game on Friday, April 26th before they open up the brand-new BB&T Point on Thursday, May 2nd. Tickets for that game, and most of Opening Weekend, are going fast!